Los Angeles is second only to Honolulu for the worst traffic city in the United States.  On average, the annual wasted time in traffic is about 56 hours.  That is 56 hours that you spend in your car, wasting your life away, as well as the life of your car.

Since we all have to drive pretty much everywhere in Los Angeles, the miles add up.  Los Angeles driving is also what is considered aggressive driving.  In some cities people can stretch an oil change to 5,000 and sometimes 6,000 miles without a problem, but definitely not in LA.  Our constant stop and go driving with all of the time sitting in traffic means that our cars are ready for this maintenance option to be done within the 3,000 mile area.

So since we need more oil changes more often, we need help finding cheap oil changes in Los Angeles, which is one of the most expensive cities to start with.

Valvoline Instant Oil change’s largest franchisee wanted to make a move into Southern California’s car servicing industry. The easiest way for him to do this…buy out EZ Lube.  With this purchase came some special discounts only available to the VIOC locations in this region of California.

You get $15 off of any full service at these Valvoline Instant Oil Change locations.

How about saving $9.00 on a Jiffy Lube Signature Service oil change.  This deal is only good for Southern California oil changes and expires on December 31, 2012. 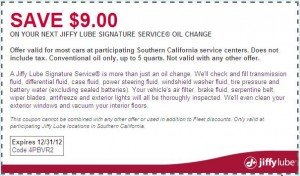